A regression test suite is a set of tests aimed to ensure that design functionality which once "worked" does not "regress" to a point where it does not work. Once these tests are developed, any subsequent release or check-in of either RTL or testbench should be checked with this regression suite.

It is important to run linting checks prior to functional regressions and prior to every code release for implementation (synthesis). Linting tools are able to reveal functional and implementation-specific code issues in seconds, saving designers from time-consuming implementation and functional verification iterations.

In design verification, regressions are built as a series of automated tests. In order to develop automated tests, there is a need to implement automated checks - either in the test case body, or in the verification environment. These automated checks clearly define test status (passed or failed) at the end of test execution. Regression is considered passing when all the regression tests are passing. In the case that at least one test fails, regression is considered failing. Once regression fails, the message is broadcasted across the development team to stop introducing design modifications into the common repository and start fixing the code. Once the common repository code is fixed, designers can then resume their normal workflow.

Linting regressions are extremely useful during a project's entire lifetime. Unlike design verification regressions, they are fast in time and modest in computational requirements. One of the common strategies when running linting regressions is to periodically poll code repository for code modifications. Once modifications are found, the linting tool launches static design verification, and as a result, generating the non-ambiguous pass/fail status. In the case regression fails, the system immediately informs the team members about the failure, allowing designers to fix the code immediately, prior to the accumulation of multiple code modifications.

The pass/fail status development helps designers to further automate the static design verification process and to set up linting regressions. For this purpose, designers have to carefully select rules that cannot be violated. These rules have to be marked with severity "Error". Once at least one rule with severity error fails, the whole lint run process fails too, returning a standard error message to the environment. The following image shows the ALINT-PRO Policy editor with selected rule severities set to "Error": 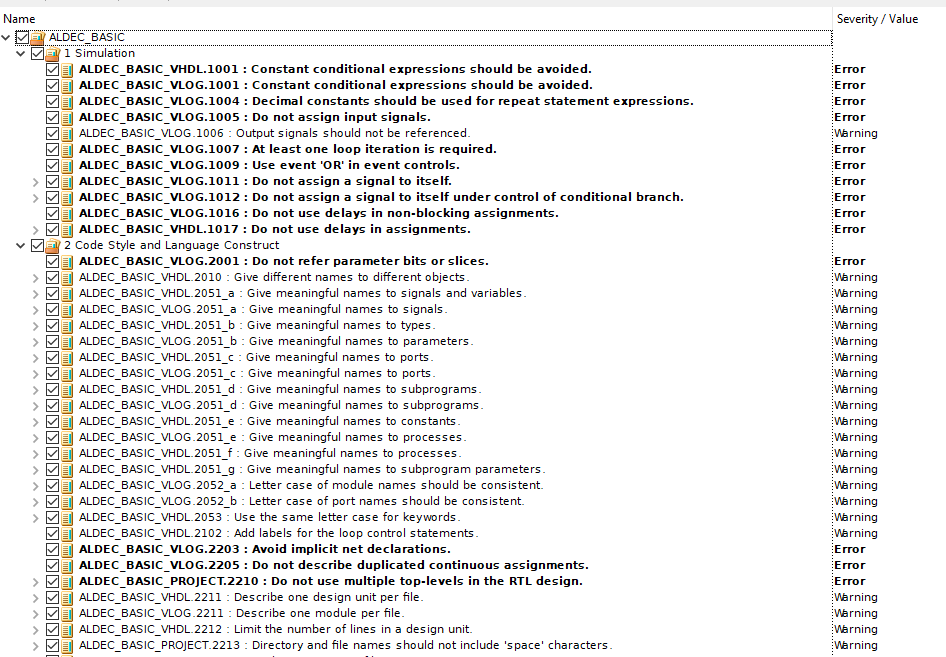 As different design teams have different requirements, for the design coding, verification, and implementation, it is difficult to come out with a common strategy for the critical rules selection. However, we propose the following steps for developing linting run statuses that, with minor modifications, may be suitable for the majority of design teams:

The script "set_regress_status.do" defines common and additional rules for the majority of ALINT-PRO plugins. Additional rules are grouped into a number of sub-groups; each sub-group may be added to the severity "Error" rules set by setting the corresponding variable to 1.

The example regression setting script is available in the Aldec repository (please see "Downloading Demo scripts" chapter at the end). Users are welcome to modifying the script, adding or removing common rules or additional critical rules.

Once a regression status is developed, there is a need to write a simple TCL run file in order to enable linting batch mode. The linting run file has to:

The following example TCL run file implements all of the above requirements: 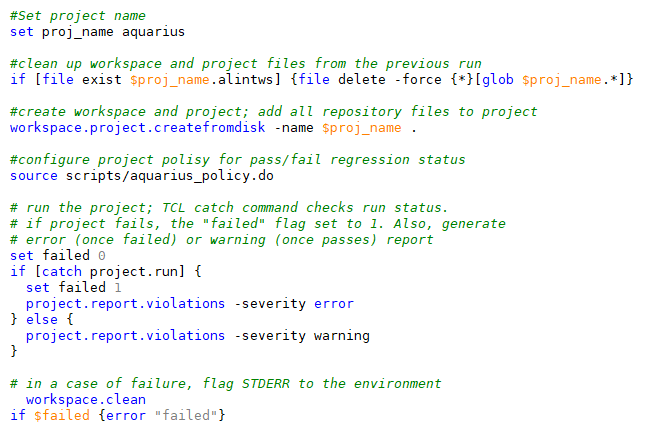 For the purpose of our example, we added an open-source Aquarius processor code (downloaded from the OpenCores.org resource) to the SVN repository. Also, we added two scripts: 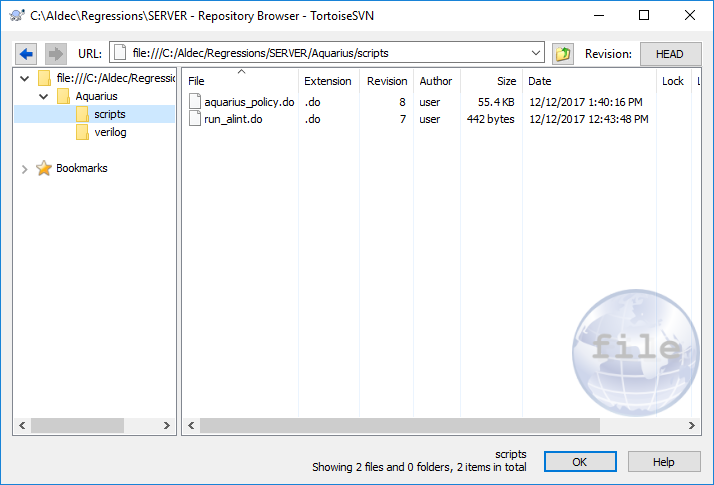 Once the SVN repository code is prepared, we may start configuring the Jenkins automation server.

Click "Build now" to start scheduling builds. Each build is identified with either blue (build passed) or red (build failed) dots and a clickable Build ID number. In order to review the failing build logs, click on the build ID number and review "Console Output", in our case error and warning logs are directed to the console.

For example, as shown, build #3 fails due to design errors. We may review linting errors in build #3 console output for more information:

To fix an error, it is advisable to open ALINT-PRO in interactive mode. Jenkins packs all project files in the .zip format. Please switch to the workspace page and download the archive:

After extracting, just launch ALINT-PRO and open the workspace file from the archive. Fix the error, commit design changes into the SVN database, and re-run Jenkins, ideally this time getting a "passed" status for the next build. For Linux users, Jenkins installation procedures may slightly differ. Please see www.jenkins.io or community sites for the platform-specific installations. For example, the following page describes Jenkins installation process on Ubuntu 16.04: https://www.digitalocean.com/community/tutorials/how-to-install-jenkins-on-ubuntu-16-04

This application note demonstrated and taught how to set up linting regressions using ALINT-PRO with the Jenkins automation server. Also, it presented the pass/fail status definition strategy for ALINT-PRO runs. The clearly identified pass/fail status for linting runs allows designers to automate linting usage, set up linting regressions, and apply the power of static code verification to maintain both RTL code quality and stability over a project's entire lifetime.