SystemVerilog is a powerful IEEE approved language (IEEE 1800™) that enables significant improvements over its predecessor, Verilog HDL. This massive language combines many of the best features of VHDL, Verilog, and C++ and provides superior capabilities for system architecture, design, and verification.

SystemVerilog breaks down into three major areas: hardware description, assertions, and the testbench language. Depending on the configuration of the tool and license configuration, designers can use features from these different areas of the language. (Click here to request a free SystemVerilog tutorial).

Aldec includes support for VHDL-2008 in both Active-HDL™ and Riviera-PRO™ at no additional cost to customers with a valid maintenance contract and with a VHDL or mixed language simulation configuration.

SystemC is an environment that allows description and verification of digital systems using C++. Governed by IEEE 1666™-2005 and originally developed by the OSCI (Open SystemC Initiative), it is a library of classes and templates that provide hardware and system related features not available in standard C++.

Both the Active-HDL and Riviera-PRO simulation and verification software solutions include support for C/C++ and SystemC and both offer designers seamless integration capability of HDL code and the various flavors of C. These IEEE-standardized interfaces allow simulation of HDL models with high-level C-based testbenches, instantiation of C models in HDL, connecting of custom visualization applications to HDL, performance of TLM and more.

The C/C++/SystemC environment is ready to use upon installation. The installer includes a supported C/C++ compiler, header files and library files required by various types of C applications (SystemC, SystemC+SCV, PLI, VHPI). C applications can be compiled with a dedicated command that sets the required defines, paths to header files, libraries to be linked, etc. This allows engineers to focus on development, rather than on the caveats of C++ compilers. A powerful set of debugging tools is also available with Aldec’s solutions. 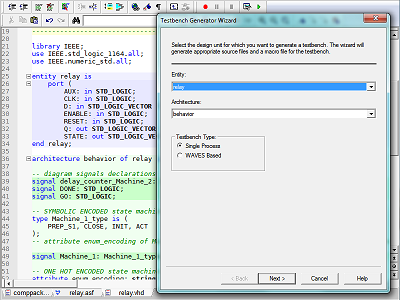